Making pita bread at home is so easy! Especially with this Lebanese pita bread recipe. This is THE BEST fluffy bread and can be done with a Kitchenaid mixer or by hand. These Lebanese pita pockets are thin and perfectly soft, and turns out with perfect pita pockets to use for shawarma or to dip in hummus.

This post contains affiliate links. The author may receive commission on purchases made through those links at no cost to you.

The smell of homemade pita bread is tantalizing, and we LOVE it fresh out of the oven! We serve it alongside any Lebanese dish or as an appetizer. This Lebanese pita bread recipe is super tasty and delicious, it is easy, although you must allow time for it to rise.

Lebanese pita is a basic Arabic bread recipe. It is used in all sorts of Arabic and Lebanese cooking, from baking it as pita bread, to using it in meat pies, and even using this as a type of Mediterranean dumpling in soups and other dishes.

You can read more about Lebanese Food by clicking that link. It is the BEST!

Keep reading and we will go over how to make homemade pita bread with this delicious and fluffy pita bread recipe.

Is pita bread the same as Lebanese bread?

Let me make a little clarification before we start, there is a difference between "Lebanese bread" and "Lebanese pita bread" in our house. Traditional Lebanese bread is an unleavened (without leavening, or yeast) that is baked in a special oven. It is very thin and it is not pita bread, nor does it have pockets.

However, Lebanese pita bread is made with yeast, is thicker than unleavened bread and has good pockets. When it bakes, it puffs up and creates a pocket bread that can be used to eat with shawarma, kafta, or to fill with my favorite, hummus and tabbouleh salad. This recipe is really the best fluffy pita.

How to use pita bread?

What do you use pita bread for? SOOOO MANY THINGS! Pita bread can be eaten by itself or warmed up with butter, it can be served alongside hummus, or any other dip.

It's lovely with Arayes, which are meat filled pitas that a grilled too!

Pita bread can be used for sandwiches instead of traditional loaf bread. It can also be lightly pan fried with oil and used as a sort of crouton in one of my favorite salads called fattoush.

One can also make ZA'ATAR BREAD, which is an amazing Lebanese flat tart, or flat bread made with Za'atar seasoning, olive oil and lemon juice.

Here is an amazing blend of Za'atar spice from The Spice House.

Homemade pita bread will last about 2 days in a airtight bag on the counter. We prefer to eat it up right away, and it is best right out of the oven or shortly thereafter.

Can I freeze pita bread?

YES! You can freeze homemade pita bread! You can ever freeze the dough and bake it later! Normally, when I make this recipe, I bake about half of the pita dough right then and there, and I freeze the other half. I roll the dough into orange-sized balls, wrap in in plastic, put it in a freezer bag and put it in the freezer

How do I thaw frozen pita dough?

Take the dough balls out of the freezer and place them on a greased pan. Cover them with either plastic wrap or a towel. Let the dough thaw for about 30 minutes then remove the plastic wrap.

Let it thaw completely for another hour or so at room temperature. Roll out into the size of pita loaves. You want and let it rise in a warm place for 30-45 minutes before baking.

What are the ingredients for homemade pita bread?

How to make Lebanese pita recipe from scratch!

First check out this short video of how to make homemade pita bread. It's the perfect fluffy pita!

Warm up ½ cup of the water until warm to the touch. You don't want it to be too hot, otherwise the yeast will not activate correctly.

Add the sugar to the warm water and add the yeast. Let it sit and activate for 10 minutes or so, or while you prepare the other ingredients.

To knead by hand or use a KitchenAid?

In a large mixing bowl, add the flour and salt. Make sure the rest of the water and milk are at room temperature or slightly warm. Slowly add the water, milk and yeast mixture to the flour either kneading it together with your hands, or using a KitchenAid mixer to bring it all together.

I use a KitchenAid mixer with the bread dough attachment and let it mix and knead the bread dough for about 5 minutes or so. It should be a very elastic mixture when it all comes together.

Cover the bowl with plastic wrap and place in a warm place in your house. Let it rise for about an hour, or until doubled in size. I notice that the time to let it rise varies, depending on how warm it is in my house, or how humid it is. It rises much faster in the summer.

When it is cold, I will put it on top of my clothes dryer and turn it on. I've noticed this helps it rise much faster.

After it has doubled in size, roll the dough into orange size balls and place in on a greased cookie sheet. MAKE SURE to wet your fingertips before touching the dough. This will help make the dough be elastic and get that nice sheen on it, it will be sticky.

Cover the dough balls with greased plastic and let it rise for another 3 minutes or so. Now you can take your dough and roll it into circles. I notice that it puffs up better when the circles are smaller, about 6 inch circles are perfect. Roll the dough on a well floured surface. Make sure it is rather thin as well, no thicker than ¼ of an inch.

Now you can either let it rise again, or I don't really notice a difference, you can now bake it.

Pita bread is normally baked in a pizza oven or something of the sort. But you can do it at home WITHOUT a pizza oven.

Preheat the oven AND your baking pan on the top rack (you can even use a pizza stone for this) to 425. As soon as it is heated up, put the oven to broil.

Open the oven and carefully add 3-4 of the pita loaves onto the hot pan. Shut the oven and bake for 1-2 minutes. it will puff up and turn into almost a ball (it's fun to watch). As soon as it does this you can take it out of the oven!

Here is a really bad picture of the pita bread puffing up... on the left, I had just stuck it in. On the right, it had been in the oven a little over a minute.

Feel free to leave it in to get slightly brown on the top as well, but removing it when it puffs up will ensure a nice and soft loaf of pita bread.

Serve it warm or at room temperature. We like it warm with hummus or even with butter or any other yummy dip!

Troubleshooting: why did my pita bread not puff up?

If your pita bread does not puff up and form a pocket, there are one of 2 things that are happening. Either the dough was not rolled thin enough, or the baking sheet and oven were not preheated enough.

Putting the pita bread in a hot oven, with a hot baking sheet or pizza stone will help thee pita bread to puff up and become hollow.

What is the difference between Naan and Pita Bread

Naan bread is an Indian bread that is made with yogurt and oil and cooked in a cast iron skillet or pan on the stovetop. This varies from Arabic pita bread since it is not made with yogurt or oil. Pita bread should puff up and become hollow, whereas naan bread is not hollow on the inside, but rather more dense.

Buy Kitchen Products from this article

Check out theses other popular recipes from A Pinch of Adventure! 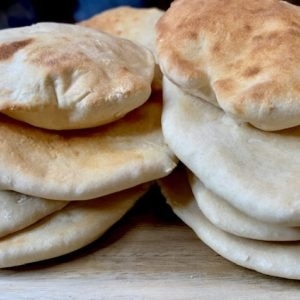 Emily Ackerman
This is an amazing recipe for how to make basic Lebanese pita bread. It is an authentic Middle Eastern bread recipe that can me used in many other dishes as well. Serve, as an appetizer, as a sandwich wrap or as a accompaniment to any dish or hummus.
4.91 from 10 votes
Print Recipe Pin Recipe
Prep Time 15 mins
Time to rise 2 hrs
Servings 36

For the Bread dough