This amazingly easy cinnamon bread is the perfect sweet bread to have with breakfast or as a dessert. This cinnamon swirl bread it topped with loads for crumbly streusel and topped with icing for the perfect finish.

Some days I crave the sweetness and smells of cinnamon rolls, but don't want to go through all of the steps and time it takes to make it. On days like that, I make this amazing easy cinnamon bread and I get everything I wanted! The brown sugar streusel topping is rich and crumbly and it's such an easy recipe because it is a cinnamon bread recipe without yeast. You don't have to wait for it to rise, you just layer it, bake it and eat it!

Now for the great debate...

I really debated what to call it. This recipe really falls into all 3 of these categories. It's similar to cinnamon rolls, its swirly and it's spilling over with that amazing crumb topping. My kids went bonkers over this recipe, so please give it a try!

As an Amazon Associate I earn from qualifying purchases. This post contains affiliate links. The author may receive commission on purchases made through these links at no cost to you.

I would like to add that using high quality ingredients really makes a difference. I say this on most of my recipes, but it's true! If you are going to all the work of making a recipe, you want your star ingredient to be good quality. That's why I highly recommend using this from The Spice House.

How to make cinnamon bread from scratch:

How do you make cinnamon quick bread? First I want to specify that this is a no yeast recipe and is also made with no buttermilk. It's a super easy quick bread recipe and you don't need a bread machine at all!

Start out with a good quality mixer, like a and cream together 1 stick of softened butter and ¾ cups of the granulated sugar with the paddle attachment. Add the egg and mix together again. When these ingredients are combined, add the milk, sour cream and vanilla.

For the dry ingredients, sift together the all purpose flour, salt, ground cinnamon, baking soda and baking powder. Mix it together with the wet ingredients until well combined and smooth.

What is streusel topping made of?

Streusel topping is generally made with brown sugar, flour, butter and cinnamon and combined until crumbly.

I love streusel! It is cut together until it turns into little pea sized crumbs and added to the top of cakes, muffins, coffee cake, breads and other pastries. For this recipe, we will be making extra, and adding some if it into the middle of the bread batter to make it a beautiful cinnamon swirl loaf.

The key is to this crumbly streusel is to use cold butter and a . You don't want your butter too soft, and you don't want it too cold. Just take it out of the fridge for about 10 minutes before making the streusel. Add the butter, brown sugar, flour, cinnamon and a dash of salt in a large mixing bowl. With your pastry cutter, cut all of the ingredients together for several minutes until it turns into coarse crumbs about the size of a pea or a little larger.

If you use a mixer, you will not get the crumbly texture that you need in a streusel topping. You don't want it to be smooth, you want it to be chunky.

Putting together the cinnamon quick bread:

This recipe makes one loaf of bread. Prepare a by buttering it and dusting it with flour. This will ensure that your cinnamon loaf will not stick to the sides of the pan. Pour half of the batter into the prepared loaf pan. Take several tablespoons of the streusel mixture and sprinkle it over the batter. Spoon the remaining batter into the pan on top of the streusel. If you want it to be a swirl bread, take a butter knife and swirl it through the batter just a few times.

Add the rest of the crumble topping to the top of the batter and place it in the pre-heated oven. Bake for 55 minutes or until a toothpick inserted in the center comes out clean. Baking time may vary from oven to oven.

Cinnamon Bread with Icing, how to make icing for cinnamon roll bread:

After the cinnamon loaf has cooled for 10 minutes, take a knife and loosen it from the edges of the pan. Let it cool completely and carefully remove it from the pan and onto a serving platter. Making icing with powdered sugar is super easy! Add the powdered sugar to a medium mixing bowl. Whisk in 2 teaspoons of milk until it is smooth. If it is still clumpy, add another ½ teaspoon of milk at a time until it has the right consistency.

Drizzle the icing over the top of the cinnamon bread and serve with a cup of coffee! YUM!

If you like this recipe check out some other popular recipes from A Pinch Of Adventure:

Check out these other popular recipes! 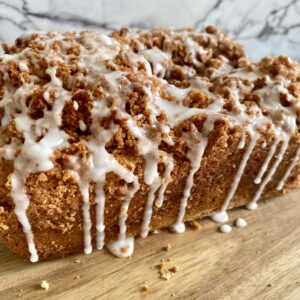 Emily Ackerman
This amazingly easy cinnamon bread is the perfect sweet bread to have with breakfast or as a dessert. This cinnamon swirl bread it topped with loads for crumbly streusel and topped with icing for the perfect finish.
5 from 11 votes
Print Recipe Pin Recipe
Prep Time 15 mins
Cook Time 55 mins
Cuisine American
Servings 8

For the quick bread

For the streusel topping